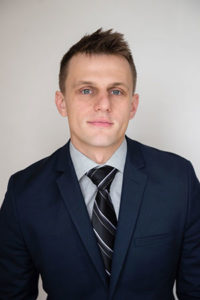 Jakub was born in Warsaw, Poland, and moved to the United States with his parents when he was 5 years old. He grew up in the suburbs of Chicago. Jakub graduated from the University of Illinois in Urbana-Champaign in December of 2010 with degrees in Political Science and Philosophy.

While attending Loyola University School of Law in Chicago, Jakub clerked for the Honorable Daniel R. Degnan in the Domestic Relations Division of the Circuit Court of Cook County. Jakub was the recipient of three “CALI Excellence for the Future Awards” as the highest scoring student in his Sales, Advocacy, and Remedies classes at Loyola.

Upon passing the Illinois bar exam, Jakub worked for a Chicago based personal injury firm representing Plaintiffs in a wide variety of cases including motor vehicle accidents, construction accidents, and nursing home abuse. He has argued before the Illinois Appellate Courts in the 1st and 4th Districts. He developed a passion for advocating on behalf of elder individuals and decided to focus his practice on nursing home litigation.

Jakub began working for the Clinesmith Firm’s Chicago office in 2019.